In addition to being the acting director, Brad has served as the deputy director. His primary areas of responsibility are health policy; community development/community engagement (including meeting facilitation, network collaboration, and strategic planning and thinking); program and grant development; program evaluation; and qualitative research.

He has provided over 300 presentations (national, regional, state, and community) on such subjects as rural health trends and issues, the future of rural health, the importance of community in rural health, community engagement, rural health policy (state and federal), policy development, health reform and rural health, the role of the health sector in community and economic development, and other subjects. He has presented numerous grant writing workshops and facilitated several strategic planning sessions. Brad has worked with over 130 rural communities in eight states in his 37-year career. He has secured, on his own or with others, about 80 federal and private foundation grants (over $30 million) that have been used to assist in the development of stronger, more viable rural health systems.

Brad has served in leadership positions for both the National Rural Health Association (NRHA) and the National Organization of State Offices of Rural Health (NOSORH). He was elected by his peers in 2010, 2015, and again in 2017 to serve on the NRHA Policy Congress, the primary NRHA structure for developing official health policy positions of the national association. In 2017, he was selected by the NRHA president to serve on the Government Affairs Committee and is a member of the NRHA Medicaid Task Force. He is a past member of the board of directors for NOSORH, having served for seven years. During his years of service for NOSORH, he received both the Recognition Award and the Distinguished Service Award. He is also an active member of the North Dakota Rural Health Association and serves as Co-Chair of the Policy Committee. For six years he served on Senator Heidi Heitkamp's Health Advisory Committee. Brad is a native North Dakotan (fourth generation), growing up on a durum wheat farm near Cando in Maza Township. He has his master of public administration degree and a bachelor of science degree in public administration from UND. 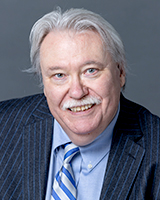 “We work with rural communities to help them solve their problems by developing local capacity and skills. We have a knowledgeable, committed staff and faculty base with a value system orientated to making rural communities stronger and more viable.”