The annual July 3rd street dance in Park River was in full swing. People lined the streets, music filled the air, but one thing was different this year: screening of everyone at the gates with ID machines helped to assure that all youth (under 21 years of age) were quickly identified and given the proper wrist band. Thanks to ID scanner machines purchased by the Walsh County Alcohol Abuse Prevention Coalition, the bar that hosted the street dance could now determine with ease who was of legal drinking age.

The ID scanners derived out of an effort to reduce excessive drinking in Walsh County. Excessive drinking and addiction/substance abuse were needs prioritized as pressing community-wide concerns in the community’s health need assessment (CHNA) report. As part of the Affordable Care Act, all non-profit hospitals, including First Care Health Center, must conduct a CHNA once every three years and adopt an annual implementation plan to address the identified needs.

First Care Health Center partnered with Walsh County Alcohol Abuse Prevention Coalition to implement ID machines at the entry gates during the July 3rd street dance that runs from 9 pm to 1 am. The ID scanners were bought so that they “could be used in large venues in the county to decrease the availability of alcohol to youth,” explains Coalition member Wanda Kratochvil.

Bar owners found the ID scanners to be helpful because amidst the crowds and the noise, they did not have to calculate age. They only had to slide the ID and the machine determined if it was an adult who could be served or a youth who could not. Bartenders also benefited as they only had to look at the adult’s wrist band before serving them. “We didn’t have to spend time checking IDs or doing math,” commented one bartender.

While different bars contract with the city of Park River each year to run the street dance, this year’s designated bar, The Dug Out, volunteered to use the ID machines, indicating their level of commitment to reduce underage drinking. 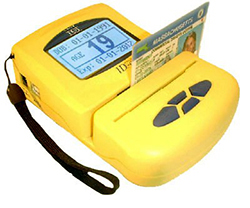 Some snafus did occur such as placing the wrong colored wrist bands on people and the gates going down too early, but overall the ID scanners helped to streamline the entry process and monitor alcohol consumption, especially among youth. The success of this implementation is evidenced by the Alcohol Abuse Prevention Coalition asking the city of Park River to add the ID scanners to future street dance contracts.

Additional initiatives taken on by the Coalition to curb excessive drinking include server education. The Coalition invited all bars and retail alcohol establishments to attend a responsible beverage server training class and one bar voluntarily participated.

Finally, to educate the young and try to change attitudes about what constitutes excessive drinking and binge drinking, students from Park River and Minto schools developed videos and radio messaging using the Parents LEAD alcohol prevention media campaign. These videos were played and radio messaging were aired during numerous regional basketball and baseball tournaments in Walsh County.

The Walsh County Other Alcohol Abuse Prevention Coalition has demonstrated a firm commitment to improving community health by their collaborative and innovative community efforts to address the excessive drinking.

For more information about the Walsh County Other Alcohol Abuse Prevention Coalition or forming your own coalition contact: