Native American Elder Veteran Serves Her Country and Her People

It is quite an accomplishment to have served in the military, especially when that person is a Native American woman in the 1970s. But Carol Sims always knew she wanted to serve her country. She enlisted in the Army at age 25.

"The recruiter came to my house to pick me up," Sims recalled. "It was hard leaving but I had always wanted to venture. I wanted to get out and see life."

Sims remembers feeling lonely the first three weeks. Her service unit was a mix of men and women, but Sims was one of only two Native American women in her unit. None of the women received any special treatment.

Women had to do exactly everything the men did, she said. But I was determined and liked a challenge. I didn't care how strenuous it was. I still loved it!

"Women had to do exactly everything the men did," she said. "But I was determined and liked a challenge. I didn't care how strenuous it was. I still loved it!"

After completing her basic training and advanced individual training in Fort Gorden, Georgia, Sims was sent to Europe and was stationed in Illesheim, Germany. She worked as a radio operator, decoding and reporting the messages to her lieutenant or captain. She enjoyed working with her crew and sergeant.

"They were a good crew of people," she said.

Sims recalled the days when she was a "newbie" and how she was first welcomed into the service.

"The Air Force welcomes you, but they didn't tell me how," she said.

One day she was walking from the mess hall to the missile site at which she was stationed. Her fellow crew were laughing, so she had a feeling something was going on. She could feel the ground shaking beneath her. Just then an F14 flew down beside her.

"They say hi with their wings," Sims said. "You could see this guy laughing and waving at me. It was so loud. Then he flew out and made a nice maneuver again."

Sims always believed in teamwork, and she showed compassion for her fellow servicemen as well. She recalled helping calm one of her crewmembers during a gas chamber exercise. She talked him through the exercise and helped him to complete the training. She also helped another crewmember become a better runner. After working with Sims, he became one of the best runners in their unit.

It was the most fun time in my whole life, being in the Armed Forces, Sims said.

Sims set out to do her best in everything while in the service. This drive to be her best helped her to outrun an accomplished male superior who was very impressed by her ability to defeat him.

While she enjoyed her time in the Army, Sims realized that the support of her family was crucial.

Family was important to helping me stay strong. You realize how much you need a family when you're in something like that, because you are put to the test.

"It was the most fun time in my whole life, being in the Armed Forces," Sims said. "Family was important to helping me stay strong. You realize how much you need a family when you're in something like that, because you are put to the test."

Sims passed the test with flying colors, demonstrating superior performance during her military career. She was named the Designated Honor Graduate for the first graduating group of radio operators in May 1979. She also received both expert and grenade badges.

Sims served two years in the Armed Forces. After a short time back home due to a family tragedy, she returned to Germany to her future husband, Tony, who was also in the military. They remained in Germany until Tony was transferred to Fort Berth, Texas.

Sims and her husband have three children: John, Joe, and Wanda. Tony retired after 24 years in the military. When deciding where to live following his retirement, Sims said, "Tony wanted to go live on an Indian reservation. He had never lived on one. And so we came to Belcourt, North Dakota. He loved it so much, he didn't want to leave."

Looking back on her time in the service, Sims said her most beneficial learning experience regarded character.

"You bring forth who you are as a person," she said. "When you're growing up on the rez, that's one life. When you go to boarding school, that's another life. I went to Flandreau Indian School, so it's all Native rules and regulations you follow there. The Armed Forces is another life. But in each area of my life, I was building character. I was building respect for myself and for others."

According to Sims, the biggest reward from being in the military was serving her country.

"You can't beat that," she said. "The greatest love I have was to have served and be able to tell people I'm a veteran, a soldier of the U.S. Armed Forces. I can salute that flag knowing I served with honor."

"The determination to go forward in life. Always get up if you are knocked down, keep moving forward," she said. "Determination instills pride in you, of who you are as a Native American Indian. Regardless of how hard life may be, get up, walk forward, and hold your head up. Stand tall and be proud. We only have this one life to live. Live it the best way you can but always respect the people you come across and respect the life you've walked already."

Sims also spoke about the importance of Native elders in tribal communities.

"It's like an eagle who flies the highest above all the birds," she explained. "Look how close they are to the Creator. They're above. They've already lived. See how they come together. It's like one, the eagle and the elders." 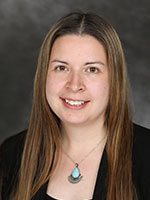 serves the National Resource Center on Native American Aging on a state, regional, and national level as an administrative and resource person for American Indian, Alaska Native, and Native Hawaiian aging issues.
Next Article
Giving Back
Previous Article
The Prime of Their Lives
Have a suggestion for an article? Send us your tip.