Much has been written about the continuing oil boom in western North Dakota. Increased oil development has led to unprecedented economic times, but has also ushered in struggles with housing, services, and infrastructure. These struggles have been exacerbated in the healthcare sector. Competition for healthcare labor has always been fierce, but has grown to a new level. Because of federal regulations and tight operating budgets, healthcare wages can't keep pace with the rest of the economy, and even when qualified applicants are found, adequate housing can be difficult to find. Despite these challenges, healthcare infrastructure in western North Dakota continues to adapt, survive, and in some cases, thrive. Mountrail County Health Center (MCHC) in Stanley is one such example of a facility that is facing the region's tremendous struggles head on, and becoming better because of it.

Located about halfway between Minot and Williston on US Highway 2, Mountrail County Health Center has seen its share of oil-related activity. According to MCHC CEO and Hospital Administrator Doris Brown, "We have seen a dramatic shift in the number of patients we serve; volume is up exponentially across the board." Even with this increased patient load, MCHC has been able to rely on its stable provider group to meet the challenges. "Our medical director, Dr. Longmuir, is fantastic. He has helped foster a team environment where our patients get the best care from our providers working collaboratively together. We are extremely grateful to have him."

For Mark Longmuir, MD '09, however, his connection to Stanley goes back much further than the three years he has practiced there. "I was born in the Stanley hospital," he said. "One of the nurses I work with now helped deliver me." With the current physician shortage across the nation, Longmuir is a perfect example of how the medical education model in North Dakota is designed to work. "I started as a CNA (certified nurse assistant) in 1997, and worked in that role until doing my undergrad at UND." Not only did Longmuir complete his undergraduate degree at UND, he also continued his training at the state's only medical school: the UND School of Medicine & Health Sciences. Following graduation, he spent three years completing his family medicine residency in Minot before returning to Stanley to practice.

Of course, not all of the MCHC providers followed the same path as Longmuir. Physician Assistant Abbey Effertz grew up in North Dakota, but was new to the Stanley area when she started practicing at MCHC in January 2013. When looking for a position, Effertz connected with the UND Center for Rural Health and took advantage of their workforce services. Through the Center for Rural Health, Effertz was informed about numerous openings and ultimately connected to Stanley after reviewing the options. For Effertz, the small-town lifestyle coupled with a diverse patient load was the ideal fit. "It's an incredible opportunity for me to learn," she said. "I learn more every day." This learning is supported by Longmuir, her supervising physician, and others. "The support I have here is really great. Dr. Longmuir is really accessible, and with our great relationship with Trinity in Minot, their specialists are always very helpful and just a phone call away."

Despite the challenges of the oil boom, both Longmuir and Effertz agree that the ever-growing Stanley is a great fit for them. For Longmuir, the city looks significantly different than it did when he was growing up, but to him, that's a positive thing. "Our culture has really expanded, which benefits everyone." The influx of new business is also very welcome. "There are businesses here now, chain restaurants, that you would have never imagined 10 to 15 years ago."

For Effertz, she enjoys the small-town life and new amenities coming to the town. "I love attending the high school sporting events and local events that different groups put on. Even with all the craziness, Stanley still feels like a community."

Longmuir echoes this notion of community. "There is a misconception that it's the Wild West out here," he said. "With a wife and four kids, I have never been in a situation where I felt unsafe or was concerned for my family's safety."

With the great people we have... we can impact the community in a positive way.

With Stanley's growing population and a stable set of providers, MCHC has been able to look to the future. This commitment to the future was demonstrated when the hospital recently revealed plans to expand their facility. For Brown, the addition is a chance to further serve the community. "With the expansion, we will be able to better serve the patients of our community, and continue to provide them the quality, patient-centered care they have become accustomed to," she said. The expansion will add an in-house CT scanner, an expanded clinic, and a remodeled emergency department. "We aren't going to shy away from the struggles of a growing community. With the great people we have, from support staff to nurses and providers, we believe we can impact the community in a positive way, and that is what we are working for."

This article originally appeared in the Spring 2014 issue of North Dakota Medicine. 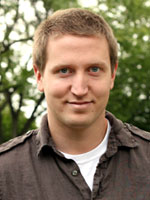 is the TruServe Coordinator for the Center for Rural Health (CRH) at the University of North Dakota (UND) School of Medicine & Health Sciences in Grand Forks.
Next Article
A Turtle Islander Meets the Maori
Previous Article
The North Dakota Brain Injury Network
Have a suggestion for an article? Send us your tip.