The Center for Rural Health (CRH) recently hosted a group of national and regional rural health officials on a tour of innovative rural and tribal health systems around North Dakota. Brad Gibbens, MPA, deputy director of CRH, and Lynette Dickson, MS, RD, LRD, associate director of CRH, facilitated the site visits. The rural health leaders came to North Dakota to learn about rural and tribal health innovation. They are from federal and regional agencies. Some of the members are charged with implementing health policy and forging administrative functions at the federal level, others represent agencies that educate, inform, and advocate for rural health. Each may have a different focus and function, but they all came to North Dakota to listen, learn, and absorb some positive examples of rural and tribal healthcare. The group met with healthcare professionals in Beulah, Hazen, New Town, and Watford City.

Each may have a different focus and function, but they all came to North Dakota to listen, learn, and absorb some positive examples of rural and tribal healthcare.

These leaders learned about a truly innovative rural health model in the communities of Hazen and Beulah. Sakakawea Medical Center (SMC), a Critical Access Hospital (CAH) located in Hazen, and Coal Country Community Health Center, a Federally Qualified Health Center (FQHC) situated 11 miles away in Beulah, represent the only example in the country where a hospital and FQHC share an administrator and board of directors. Public health also serves on the board. This collaborative model creates a better understanding between the two organizations, along with broader community representation. In addition, SMC recently opened its new facility. The building has state-of-the-art equipment and is designed to better facilitate care. This CAH is also part of an alternative payment model and is one of only seven CAHs in North Dakota that participate in an Accountable Care Organization (ACO), which places greater emphasis on population health, prevention, and care coordination.

It is not uncommon to have geographical access problems. However, the geography of the MHA Nation creates severe access issues that exacerbate population health.

About 110 miles north of Beulah on the Mandan, Hidatsa, and Arikara (MHA) Nation reservation is the Elbowoods Memorial Health Center in New Town, North Dakota. Much of this reservation (including productive agricultural and hunting land) was flooded in the early 1950s as part of the Garrison Diversion project, which created Lake Sakakawea. At the time, the federal government made a promise to the people of the reservation that they would have a new health center to replace their lost hospital. In 2011, Elbowoods (named after the flooded community of the same name) was opened. This beautiful state-of-the art clinic serves the health and medical needs of the MHA Nation by providing primary care, behavioral health, diabetes care, children's health, optometry, dentistry, and other critical services. The visitors learned not only about services provided, but also how an Indian Health Service-contracted facility works in contrast to standard Indian Health Service operations. Officials also learned that access to healthcare for some of the tribal members is greatly affected due to the massive size of the lake, which divides the reservation into natural sections and cuts through the middle of the MHA reservation. Rural communities typically have access issues, and it is not uncommon to have geographical access problems. However, the geography of the MHA Nation creates severe access issues that exacerbate population health.

Finally, the caravan traveled 50 miles farther west to Watford City where they experienced rural highways in the Badlands and encountered roundabouts designed to safely move the heavy oil tanker traffic caused by the oil boom. Located in the heart of oil country, Watford City saw its population explode from about 1,500 prior to the boom to a peak of nearly 14,000. Today, the estimated population is about 10,000. This rapid growth placed heavy pressure on a number of community systems, including healthcare. In June 2018, McKenzie County Health Center (MCHC) opened a new state-of-the-art medical facility. The hospital has 24 acute care beds and features nine emergency bays, a helipad, a MRI center, and two operating rooms. In additional to touring the new CAH and clinic, the visitors also toured the updated nursing home and assisted living facilities that has 44 private resident rooms, as well as three resident rooms for couples. Few rural hospitals in North Dakota still deliver babies, but MCHC plans to buck the trend and reopen obstetrics services late this fall. Additionally, to help address a common concern of hospital-acquired infection, the MCHC invested in a Tru-D disinfection system. It is one of the few "disinfection robots" in North Dakota. The system uses ultraviolet light or hydrogen peroxide vapor to destroy multi-drug resistant organisms, such as methicillin-resistant staphylococcus aureus (MRSA). MCHC's innovation also extends to payment reform. Like the Sakakawea Medical Center, MCHC also belongs to the Great Plains-High Sierra ACO.

The group of national and regional rural health leaders traveled more than 700 miles across North Dakota in 2 ½ days to observe the state's rural and tribal healthcare firsthand. The visits gave them a greater appreciation and understanding of the challenges rural states face because of the distance to travel for healthcare. They will share what they learned with other rural health stakeholders with the hope of building and supporting rural health systems to assure access to better, safer, and high quality healthcare for rural citizens. 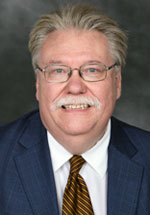 is the Deputy Director of the Center for Rural Health (CRH) at the University of North Dakota (UND) School of Medicine & Health Sciences and an assistant professor at the School of Medicine & Health Sciences in Grand Forks.
Next Article
Community Stages "Skittle Skool" to Help Tackle Big Issues Facing Youth
Previous Article
Connect and Engage
Have a suggestion for an article? Send us your tip.