Many healthcare professionals often can recall the exact moment they realized they wanted to enter the healthcare field. For Liz Tofteland, a registered nurse, it was witnessing a helicopter ride to the hospital for her grandfather when she was young. Now, she is creating opportunities for students to have their own "aha" moments through local Scrubs Camps.

Unlike Scrubs Academy, which brings sixth- through eighth-grade students from all across the state to the University of North Dakota (UND) School of Medicine & Health Sciences for a four-day health career immersion camp, the Rural Collaborative Opportunities for Occupational Learning in Health (R-COOL-Health) Scrubs Camps are one-day camps hosted in rural communities. The Scrubs Camps program is operated by the UND Center for Rural Health (CRH) and focuses on students in grades 5-12. Camps are organized by local site coordinators and supported by CRH grant funds. As part of the grant requirements, sites must work with a local healthcare facility, economic or job-development authority, and a local school so that each camp is a community-wide effort. The collective goal is an event where students can learn about careers in healthcare from local healthcare professionals.

Reaching as Many Students as Possible 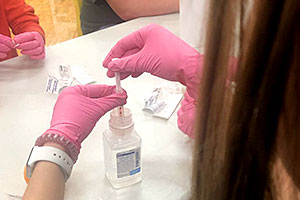 Tofteland is the North Dakota eCare School Health program manager for Central Regional Education Association, which covers 48 public school districts, plus additional nonpublic schools and colleges. As part of her role, she works to expose students to healthcare careers by hosting Scrubs Camps in various areas within her region. The most recent camp hosted by Tofteland was on April 15 in Linton, North Dakota, reaching 44 junior and sophomore students. The camp was initially going to be virtual, but Tofteland, who has hosted camps in the past, did everything she could to have the event in person.

"I know how good Scrubs Camps are in person," Tofteland said, "and I know how impactful these hands-on sessions are. I just didn't want to do the virtual route if we could help it." 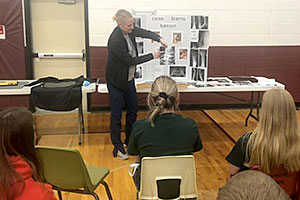 Following all appropriate COVID-19 precautions and keeping participants distanced, she was able to have an in-person event with eight presenters, all from the Linton community.

"I am a nurse, and I know how important connection and engagement is. I think these camps are so important," she said.

So far this year there have been eight Scrubs Camps in North Dakota, reaching an estimated 1,400 students in all. The largest camp took place virtually for the Devils Lake region, with 630 fifth- and sixth-grade student attendees from 14 area schools. Jennifer Carlson, executive director of the Northeast Education Services Cooperative, is the site coordinator for this camp, which was held through Zoom in March.

We knew it was really important to hold the camp virtually, rather than not have it at all.

"We knew it was really important to hold the camp virtually, rather than not have it at all," Carlson said. She noted that this camp has been held annually since 2010, and teachers from her region's schools eagerly await the announcement of the camp each year.

With the virtual platform, a lot more work went into preparation ahead of the event, which featured 10 health career sessions. Each school needed supplies mailed to them so students could use the appropriate materials during the various sessions. For example, Lego pieces were used during the pharmacy session where the activity demonstrated the process of creating medicine. As such, Lego packets needed to be sorted and mailed to students ahead of the camp.

Both Tofteland and Carlson agree that even though the camps are a lot of work, it is more than worth it to give students a glimpse at possible future careers. Through local programs such as Scrubs Camps, area students may start showing early interest in healthcare, which ultimately can lead to them coming back to their community to live and work in a healthcare setting. Donna Weigel, a nursing instructor at Lake Region State College (LRSC), has seen firsthand the effect the camp has on future health professionals.

LRSC has many nursing students, and nearly all got their interest in healthcare from Scrubs Camps.

"LRSC has many nursing students, and nearly all got their interest in healthcare from Scrubs Camps," she said.

An average of nine Scrubs Camps are held each year in rural North Dakota communities. To learn more about hosting a Scrubs Camp, visit https://ruralhealth.und.edu/projects/scrubs-program/camps.

is the connection between rural healthcare facilities in North Dakota and qualified health professional job seekers. As the workforce specialist, she assists rural facilities to attract medical providers and other health professionals to their communities by sharing job opportunities. Through her position, Stacy is working to reduce the healthcare workforce shortages throughout the state.
Next Article
University of North Dakota Sets Example in Rural Behavioral Health
Previous Article
Virtual Dakota Conference on Rural and Public Health Reaches a Large Audience
Have a suggestion for an article? Send us your tip.