NRCNAA Looks to the Future While Honoring the Past

The National Resource Center on Native American Aging is celebrating its 25th anniversary by honoring those who helped get it to this point while also focusing on the future and its continued mission to help Native elders.

Among the highlights of the celebration was a banquet held December 18, 2019 at the Alerus Center in Grand Forks, North Dakota. Emceed by Chance Lee Rush of Three Affiliated Tribes, the banquet honored former directors and advocates of the program, including:

Through a cooperative agreement with AoA, an agency within Administration for Community Living (ACL) and United States Department of Health and Human Services, the NRCNAA was founded within the UND SMHS Center for Rural Health in 1994. Leigh Jeanotte served as the NRCNAA's inaugural director for about one year while the grant program objectives solidified. Jeanotte realized the enormous task of overseeing two programs and leaned on Dr. Alan Allery for leadership. Jeanotte spoke fondly of Allery's leadership and background in health and credits Allery for "getting the program off the ground and moving forward."

With his creative thinking, grant-writing skills, and ability to foster relationships, Allery was the driving force behind the NRCNAA's early success. Allery spent nearly all of his professional career working to improve the lives of American Indian people in various capacities and developing numerous projects at local, regional, and national levels. Allery directed both the NRCNAA and UND Student Health Services until his death in 2007.

Allery and Dr. Richard Ludtke worked tirelessly to improve health outcomes for Native elders. Both were committed to identifying the health and social issues Native elders faced in order to help tribes develop community-based solutions to improve elders' quality of life. One of the components needed to understand the issues affecting Native elders was a needs assessment survey. To effectively tackle this task, the team needed to grow.

The AoA/ACL endorsed the Identifying Our Needs: A Survey of Elders needs assessment, and it became an invaluable tool for tribal Title VI organizations. The Older Americans Act established the Title VI grant program in 1978. Through the program, tribal organizations are able to provide nutrition and delivery of home and community-based supportive services for Native American elders.

The NRCNAA also became a training ground for numerous American Indian undergraduate and graduate students. Like McDonald, Dr. Twyla Baker, Dr. Paula Morin-Carter, and Dr. Collette Adamsen climbed the ranks in a similar fashion. They started as NRCNAA graduate research assistants and worked their way up the ladder, eventually becoming directors as they completed their doctoral degrees at UND.

When we had our students working, cleaning data, analyzing data, every drop of sweat was to give back to those communities.

Just like Allery, all the former directors continue to give back to tribal communities in substantial ways. Morin-Carter, now the Billings Area Indian Health Services Health Promotion Disease Prevention coordinator, proudly recalls her time as a student researcher and supporting other American Indian student researchers.

"It's about contributing through something that will positively impact their communities," she said. "When we had our students working, cleaning data, analyzing data, every drop of sweat was to give back to those communities."

People who were doing the work had good hearts, and they had buy-in to what was happening out there in tribal communities.

During the last two decades, NRCNAA's mission of empowering Native people to develop community-based solutions didn't really change, according to McDonald. "People who were doing the work had good hearts, and they had buy-in to what was happening out there in tribal communities," he said.

Baker, who now serves as president of Nueta Hidatsa Sahnish College, reminisced about NRCNAA staff spending time "explaining things so that elders, advisory committees, and tribal councils could understand what our purpose was and that we weren't necessarily someone there to come and harvest data and then just disappear. We were trying to establish trust relationships with each of these communities and the people who were within them."

A stipulation of the AOA/ACL funding is that the NRCNAA director is an enrolled citizen of a federally recognized tribe. This requirement was meant to affirm the expertise of cultural knowledge through lived experience and professional achievements. It was not always an easy task to go into tribal communities to talk to tribal leaders about data collection. Tribally connected leadership has proven to be a key component to the success of the NRCNAA.

"The 25th anniversary of the resource center is an accomplishment in and of itself," Baker said. "It's kind of a testament to the validity of the work, the quality of the work, the need for it, and the fact that we're still telling their stories. We're still helping them to tell their stories through data, through research, and really empowering these communities and helping them to be their own advocates."

Adamsen proudly emphasizes that tribal organizations have participated in the NRCNAA needs assessment for the last 21 years – seven three-year cycles. During each cycle, more elders participate, identifying health and social issues. In December 2019, nearly 23,000 Native elders participated in Cycle VII of the NRCNAA's survey. The NRCNAA has often been called to participate in congressional hearings to advocate for additional funding for long-term services for tribal elders, so the data from the surveys has been incredibly valuable.

Honoring the Past & Building Towards the Future

Cynthia LaCounte has a long history with the NRCNAA and attests to the value of strong relationships with tribal nations. She was a former Title VI director and tribal chair for the Trenton Service Area before moving to Washington, D.C., to contract with Kauffman & Associates with Title VI programs, eventually leading to the position at the ACL. With the support of UND SMHS and the Center for Rural Health, LaCounte has watched every director build on their predecessor's foundation.

Optimistic for the next 25 years, the NRCNAA plans to expand long-term services and support through on-site trainings, webinars, and data boot camps. With partners such as the American Association of Retired Persons (AARP), National Council on Aging, and the National Council of Urban Indian Health, the ability to assist tribes and tribal elders by advocacy through data analysis can be maximized.

In 2018, Adamsen received $285,000, the first installment of a 25 ½-month, $385,000 AARP award titled Urban Indian Elder Project. When asked about the project, Adamsen said "I feel like expanding our resources and assistance to the Native urban elder population is definitely a great accomplishment," said Adamsen. "We are able to expand our work to assist them with identifying their needs and helping to find resources to meet those needs."

The NRCNAA is truly a great center, and to continue to be at the forefront, helping to address Native elder issues is something to be proud of.

Adamsen is mindful of her predecessors. "I also think working with tribal communities and partners the past 25 years and still going strong is a major accomplishment," she said. "To be able to work with so many tribal communities throughout the nation and maintain our partnerships is amazing. The NRCNAA is truly a great center, and to continue to be at the forefront, helping to address Native elder issues is something to be proud of." 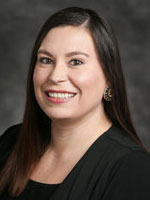 is the outreach coordinator with the National Resource Center on Native American Aging with the Center for Rural Health at the University of North Dakota School of Medicine & Health Sciences in Grand Forks.

Next Article
The Big 4-0
Previous Article
Former CRH Leader Officially a Living Legend
Have a suggestion for an article? Send us your tip.